The USCA’s Rules of Curling: Club and Bonspiel Use state:

“R6.  FREE GUARD ZONE (FGZ)  (a) A stone that comes to rest between the tee line and the hog line at the playing end, excluding the house, is deemed to  be within an area designated as the FGZ. Also, stones that are in play, on or before the hog line, after striking stones in the  FGZ, are deemed to be in the FGZ.  (b) If, prior to the delivery of the fifth stone of an end, a delivered stone causes, either directly or indirectly, an opposition  stone to be moved from the FGZ to an out‐of‐play position, then the delivered stone is removed from play, and any  displaced stones are replaced to their original positions by the non‐offending team. ”

Here is a visualization of the Rule: 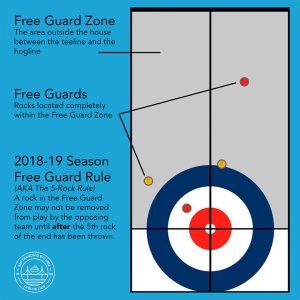