The Men’s team lineup is as follows (listed in order of peer seeding*): 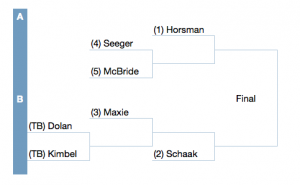 *Peer seeding was conducted using one ballot per team to rank the teams from 1-18, while ranking themselves last.  This 18th seed was then dropped.  Furthermore, the highest and lowest seeding for each team was discarded.  One team did not complete the ballot, therefore the ballot was not counted.  Finally, the ballot with the highest standard deviation from the mean was also discarded.